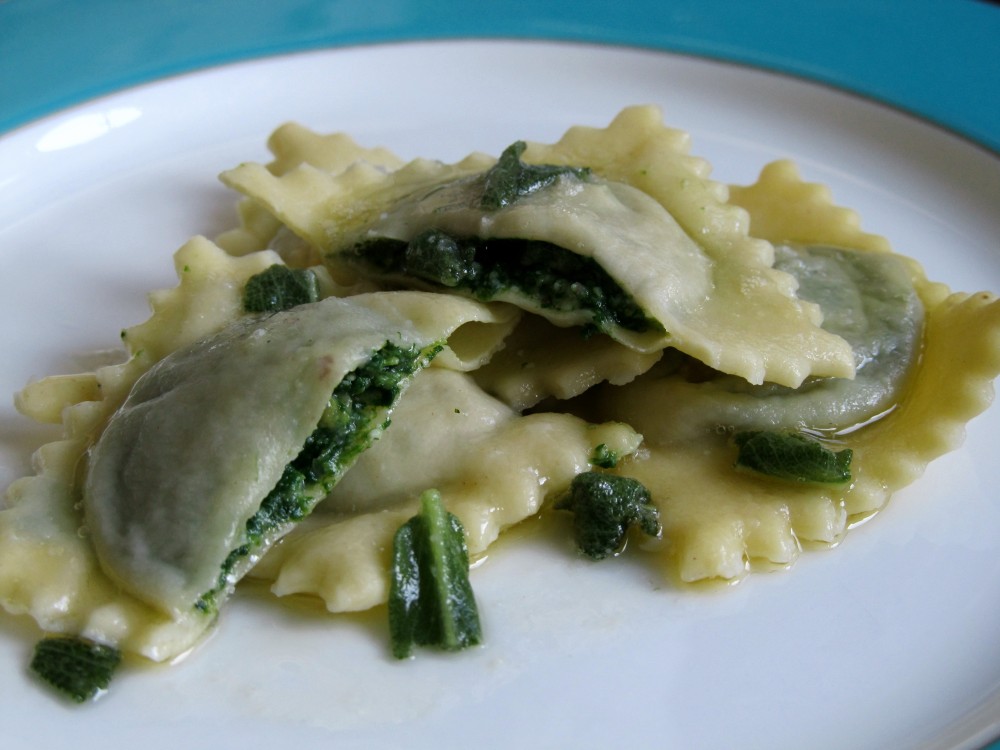 After New Year’s and the end of carb-overload season I’m always looking to create some lighter yet fulfilling meals and I think pastas are a great blank canvas for this.  It had been a while since I made ravioli so I decided we’d have some for Sunday dinner.  The only major question was, what kind of filling for the ravioli?  Like most people who overdo it in December (paying for it at the gym this month), January is the month where I crave green leafy vegetables, probably because I haven’t seen one since Thanksgiving.  Actually I’m game for just about any vegetable, just so long as it’s not candied, sweetened, or glazed.  So with the goal of incorporating more green into our diet in mind, I made some spinach and mushroom ravioli.

I love making ravioli but since I don’t make them often enough it helps to make a lot in one sitting.  The first couple dozen are always really ugly looking but by the time I get to the last of the batch they’re looking like real ravioli (as opposed to fake ones).  On the first run I always seem to forget not to make the dough too thin, end up not putting enough stuffing in, and forget to dust the finished pieces with some flour so they won’t stick to the tray.  Of course the second batch drifts to the other extreme.  On the third set I’m in business.  Regardless, they are all edible, and one good thing about cooking (generally) is you can eat your mistakes.

I liked this stuffing.  It was simple, fresh, and didn’t overpower the pasta.  The next time I make it I may add some more ricotta and maybe even an egg just to further bind the spinach and mushrooms together but the flavors here were well balanced.  The spinach mushroom ravioli were very light and airy and I think a lot of that credit is due to freshly made pasta.  For the finish, I opted to stick with the simple minimalist approach and just tossed the ravioli in some brown butter and sage with a squeeze of lemon juice for some acidity.  Delicious!

Pasta dough (enough for 6 dozen, some for eating, some for freezing)

Place flour in a bowl, make a well in the middle, add eggs and mix.  When all flour is incorporated remove dough from bowl and knead for 10 minutes.  Wrap dough ball in plastic wrap and put in refrigerator for an hour.

Over medium high heat melt the butter and sauté the mushrooms until browned.  Add the spinach and continue cooking until the spinach has wilted and most of the water released has evaporated.

Transfer the spinach/mushroom mixture to a food processor and puree until smooth.

Transfer to a mixing bowl and stir in the ricotta and lemon juice.  Season with salt and nutmeg to taste.

Put mixture in a large Ziploc bag.  Cut a corner off the bag for an instant disposable pastry bag.

Remove pasta dough from refrigerator and divide up into 4 equal sized pieces.  Take one piece and roll the dough out to #7 setting.  It should be big enough to make two pieces for the ravioli press (top and bottom).  Save the cut edges, you can squeeze out (literally) a few more sheets from them to get 6 dozen.

Place one sheet on the tray and push the dough through the holes with the top piece of the press to form pockets for the filling.  Squeeze the filling into the pockets.  Place other sheet of pasta on top.  Press the edges down with your fingers to seal or use a rolling pin (I did this, worked great on the tray edges).  Pop the ravioli out onto a flour dusted tray/parchment paper.

If you don’t have a ravioli press then just place the filling in spots on one half of the sheet, fold over the other half and press seams together, then cut into individual pieces.

Bring a pot of water to boil and drop them in!