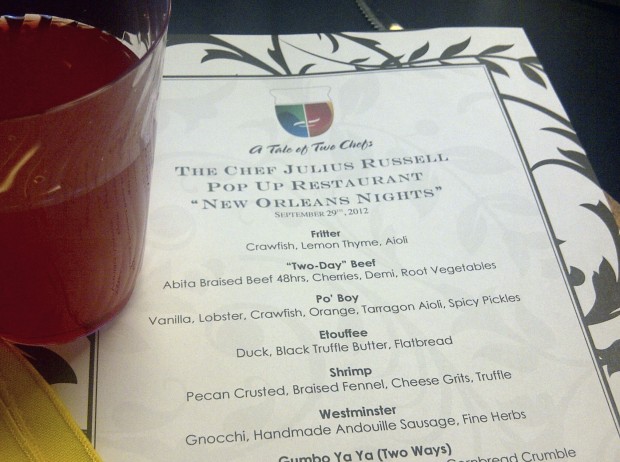 Pop-up restaurant?  What’s that?  A restaurant which pops-up somewhere of course.  Seriously though, a pop-up restaurant is when a chef takes over a space for a night, takes reservations, and has a dinner service for that night and the next day it’s gone.  The concept has been around for a while but I think it’s only really taken off in the USA in the past few years.  Last Saturday evening Cheryl and I had the pleasure of dining at Chef Julius Russell’s pop-up restaurant at Westminster Hot Dog’s West Loop location for a New Orleans Dinner.  It was a great event and well worth it!

I began following Chef Julius on Twitter this past March after Cheryl and I attended Chowder Fest  here in Chicago.  Chef was there with his amazingly delicious Chilean seafood chowder with layers of flavors.  I went back for a lot of seconds (he had truffle croutons, people!) and he ended up winning Fan Favorite.  Anyway, started following him on Twitter and in August I saw a Tweet from him about his third pop-up restaurant event at the end of September.  First reaction was “how’d I miss the first two?!?!”  Second was to forward the information to Cheryl saying “this is what I want as a birthday present” (which was mid-September).   She most graciously obliged.  10 course dinner and drinks, for $75 (tax and tip included).  You could get the VIP ticket ($95) for tableside preparation of bananas foster and a goodie bag but since I’m not a fan of bananas (I dislike the smell, taste, and texture of them, go ahead and mock) we went with the normal ticket.  That’s a pretty good deal when you figure in the alcohol and especially if all the courses were going to be as delicious as his chowder.

On Saturday we hopped the el to the Loop and made our way over to Westminster Hot Dog.  Upon arrival we were greeted, seated, and offered some Chilean wine.  Chilean wine?  Yup, Chef Julius is also a Chilean culinary ambassador.   We opted to drink some Carménère, a red which has a very interesting story behind it.  If I remember correctly Carménère is an old grape from Bordeaux brought to Chile by some winemakers.  At some point the grape was pretty much wiped out in Europe by either a fungus or an insect (can’t remember which) and everyone forgot about it.  Many years later Carménère was re-discovered in Chile and re-introduced to Europe, but the Chileans had been using it all along and were making some good wine with it.  Knowing the wine’s history and knowing of Chef Julius’s relationship with Chile I figured this would be a pretty good choice.  It was.  Cheryl was impressed with it too.  In addition to the wine there were also some large coolers of Hurricanes and water available.  The Hurricanes tasted absolutely delicious…and dangerous!  Waaaaaay too smooth.  Tasted just like fruit punch.  Even though we didn’t drive we decided it would be wise to stop at one and stick with the wine.

The dinner was phenomenal.  Very intimate setting, Westminster Hot Dog is not a huge location, I’d say there were +/- 30 diners.  We were seated with two other people, a couple of students from Sweden, who were a pleasure to meet and share dinner with.  Anyway, we were given two samples to start with which weren’t on the menu, one of which was some beef on crostini which had really amazing flavor, and the other was shrimp with succotash.  Chef came out, spoke a little bit about the menu and what his vision was for it, and then the tasting really kicked off.  From the menu:

We had everything except the VIP dessert.  Our table’s favorites were the Po’ Boy, Etouffee, Red Beans, and Beignets.  That’s not to say everything wasn’t delicious, because it was, but these particular items would get ordered over and over again if they were on a restaurant menu as appetizers, entrees, and dessert.  What I really love about Chef Julius’s cooking is the way he really layers flavors.  For example, each bite of the Po’ Boy gave you a different flavor.  You taste the vanilla, next bite the orange comes forward, next the tarragon.  And it’s like that with all of them.  The sausages were made in-house by Westminster and these guys really know their sausage.  The andouille was fresh out of their smoker and you could taste it!  There was also a quiet heat to some of the dishes.  You wouldn’t feel it at first but when you’d finished there would be an oh-so subtle warmth growing in your mouth.  It never built to five alarm fire but was a gentle welcome spiciness.   Service was great, they kept our wine glasses full and were very attentive.

After dinner we ended up chatting a little bit with Chef Julius, his wife, and a few of the Westminster people.  He actually remembered my tweet to him about Cheryl buying the tix for my birthday which I thought was pretty cool and he even gave us a couple of items to take home.  Can you see why I’m a fan?  He’s really approachable and friendly and makes some delicious food.

Chicagoans, I highly recommend you follow him on Twitter and Facebook (and those Westminster guys, who he sometimes collaborates with on sausages) to find out when his next pop-up is happening.  It’s a great event, different, and lots of fun.  They don’t pop-up every month but I can’t wait until his next one!