Ok, if the last post wasn’t enough to make you jealous, then this one could: the first appearance of wine! Oh and a little bit about Auckland. For the record these posts are in no particular order. The mountain phase in the last one was about 3/4 of the way through the trip. This post is all about our arrival, initial impressions, and day trip to “Wine Island”.

When planning and researching our trip we found most people advised not staying too long in Auckland. Even though it’s New Zealand’s largest city there’s not a whole heckuva lot to do and see in the city proper. So we just planned on flying in, staying a couple of days, and then moving on. However, the one thing we knew we were absolutely going to do was take the ferry to Waiheke Island (aka Wine Island) and drink some wine.

Waiheke Island is a short 40 minute ferry ride from the waterfront. WIth over 20 vineyards the main attraction  is definitely wine and cellar door (tasting room) hopping, but it has some beaches as well, and there are people who live there and commute to work in Auckland. Yes, on the ferry we both commented how it wouldn’t be a bad commute. At least in summer! But for the most part, everyone is hopping on the ferry to go taste wine.

There is absolutely very good, award winning vineyards on the island. As our first New Zealand wine experience it was perfect. We quickly learned there is much much much more to New Zealand wine than sauvingon blanc. Trust me, they are definitely doing some amazing things there and are keeping the good stuff to themselves.

Anyway, part of our plan for Waiheke was to take a short hike/walk from the ferry landing around the end of the island and end up on a road with 3 vineyards/cellar doors on it so we could stop in for lunch and taste our way back to another trail to the ferry. Well, we only made it to one. 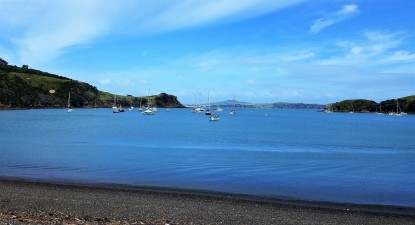 The trail began at the ferry terminal 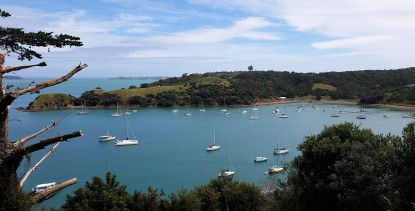 The up onto a ridge overlooking the harbor

Making our way around the end of the island

They weren’t home at the time 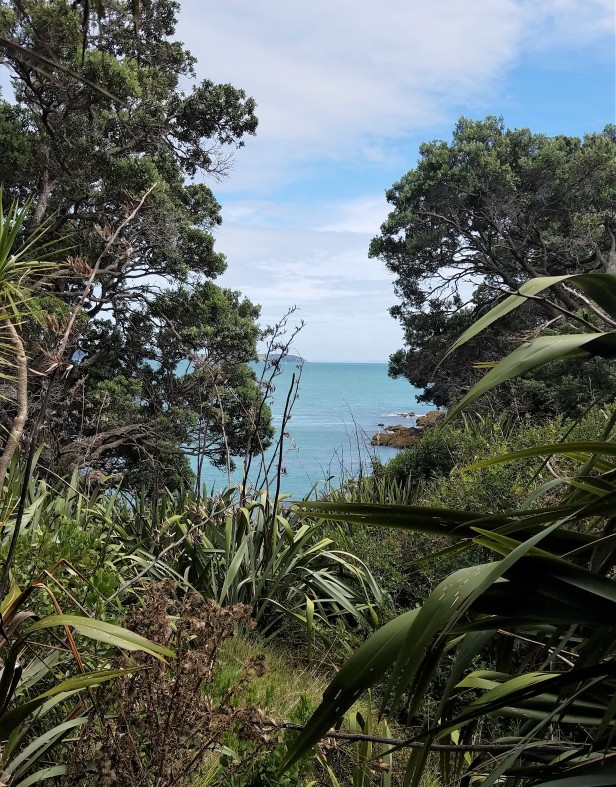 As we approached the end of the trail we discovered it was closed and the link to the road was beyond the closure. Well that sucks. A little backtracking got us to another link on a different road which made the last planned stop the first. And…yeah we never got further than that one. Mostly because the views were amazing! 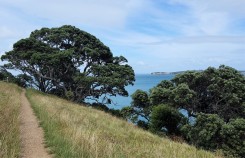 Our wine tour basically started and stopped at Cable Bay vineyard, which wasn’t necessarily a bad thing! Something we quickly discovered was most wineries, vineyards, also have restaurants and cafes, a nice option to have. Tastings are also available in the tasting rooms, ‘cellar doors’, but if you don’t want to do a full on tasting you can sit and have a couple glasses with food. This ended up being a tactic of ours later on in Marlborough.

Auckland way back there in the distance 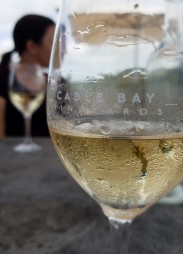 Probably the best cheese board we had on the trip

As you can see, Cable Bay had an amazing view. The hike was very nice and fairly easy, on a well marked and maintained trail. We pretty much sat down, took in the view, then looked at each other and asked each other ‘do we really need to go to the others?’ The good food selection sealed it so we spent a few hours just sitting, eating, drinking, and gazing out at Auckland across the water.

Ok, remember when I said we were only going to stay in Auckland a couple of days? Well the day we were heading down the south island, a tropical cyclone hit the islands. Pretty much shut down the whole country and flights were canceled. We were stuck. Once we got all sorted out with a place to stay for the night and rebooked our flight, we wandered about trying to occupy ourselves in rainy Auckland.

Sometimes, things work out well when you aren’t expecting it. We were kind of down because even though there was nothing we could do about it, well, we were stranded. But, in our wanderings we actually stumbled upon a couple of very fun things, like an excellent ‘speakeasy’ cocktail bar called Caretaker and The White Lady, a burger trailer on a side street which has been around in Auckland since 1948. Very tasty burger, and it really hit the spot.

Bacon cheeseburger had to be done

Walked around the corner from Caretaker and saw a trailer which smelled awesome.

In the end Auckland treated us well. We found good, simple eats there and also discovered they love their coffee in New Zealand. The cafe culture is quite vibrant. Pretty much all of the coffee shops had some sort of food menu with pastries, sausage rolls, meat pies, salads, etc. And there were plenty to choose from. On some streets, it seemed like every other shop was a cafe.

Extra day completed we made our way back to the airport in order to finally get on with the rest of the adventure. And the next stop would be a lot of fun . . . to be continued . . .

First dish we had: baked green lipped mussels with chorizo

Sky tower. No, we didn’t go up. Our cab driver said ‘you’re from Chicago, you’ve been up big buildings’