As mentioned last week, we were supposed to be out of town for my birthday but it didn’t work out. That’s ok, but it left us with a big question: what to do? Normally it’s dinner at one of my favorite restaurants but I didn’t feel like that. Instead, I decided we’d get a really nice cut of beef and a good bottle of wine and just grill for Sunday/birthday dinner.

Not just any cut though, a bone-in ribeye. I’ve been wanting to try the grilling method in this video for a while and thought birthday dinner was a perfect opportunity. I was missing one thing though: a salt block. While it didn’t seem a very integral part, it just wouldn’t be the same without one. I mean if you’re going to do it, do it correctly.

Well, it just so happened we were in my favorite spice shop (Savory Spice in Lincoln Square) on Saturday and what did we find? Himalayan Salt Blocks! We quickly acquired a small 8×8 slab (about $32), one which would easily accommodate a bone-in ribeye. We then walked across the street to the butcher shop and picked up the ribeye.

So how does one cook with a slab of salt? According to research you can heat these blocks up to a very high temp and they retain their heat for a long time. Normally I would be dubious of this but did you see that video? Seemed like it worked to me. And apparently you can cook on them indoors while the salt block is sitting on a table. I suppose it would be fun to kind of ‘grill’ strips of beef or whatever while sitting at the table; your very own salt block hibachi!

Anyway, per the instructions you need to heat the block up very slowly so as not to crack it. Yes yes, in the time you get the thing all heated up you could have cooked dinner already. This was not lost on me. But if you plan ahead you can be sitting outside having some cocktails playing cribbage while the block heats up. Like we did. And the extra bonus of the salt block is that it seasons the food while it’s cooking. It’s a big hunk of salt! So no, I did not salt the ribeye before grilling.

It took about 45 minutes for the salt block to gradually get up to the required temperature. I just placed it over one burner on the grill and started out with the burner all the way on low. About 15 minutes later I turned the heat up to medium, and 15 minutes after that to medium-high. By this time I could really feel the heat coming off of it.

At this point I fired up the other burners to get the grill ready for searing the ribeye and turned off the burner underneath the salt block. Once the grill was hot enough I seared the steak on both sides, turned off the burners and moved the beef over to the block. It sizzled when I placed it down (check out the video over on the RG Facebook page and have the sound on!). Per the cote de boeuf video I turned it over every 5 minutes in order to get even cooking. Not taking any chances, I also used a meat thermometer to tell me when we hit 130°F. Unless you’ve been working a grill at a steakhouse all your life and just know when it’s done, there’s no shame in using one. Seriously, just don’t mess around with an aged bone-in ribeye. 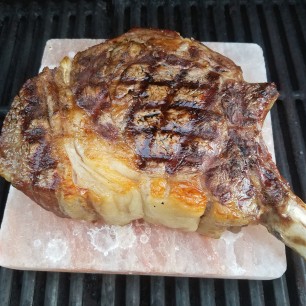 So how did the salt block do? I was amazed at how fast it actually cooked the thick steak. When I put it on the block the internal temp was 90°F. It got up to 130 in about 3 flips. I think the alarm on the thermometer went off right after I flipped it the 3rd time. And this is with no burner going on the grill, just the heat from the salt block! And when the meat was resting I threw some green onions to see if they’d cook. They did, and they picked up some really nice salt and meat flavor too. Clean up is simple too, after it cools down obviously. Just scrape off all of the bits. No need to wash it because 1) water dissolves salt and 2) it’s a block of salt, a preservative, no bacteria is growing on it (allegedly).

Will I use it all the time? No, but I can definitely see myself using it whenever we have some good cuts of meat, and I can use it indoors on the stove top. Just heat it on top of the gas burner like the grill. It’s a pretty good birthday present and the steak was cooked and seasoned perfectly!