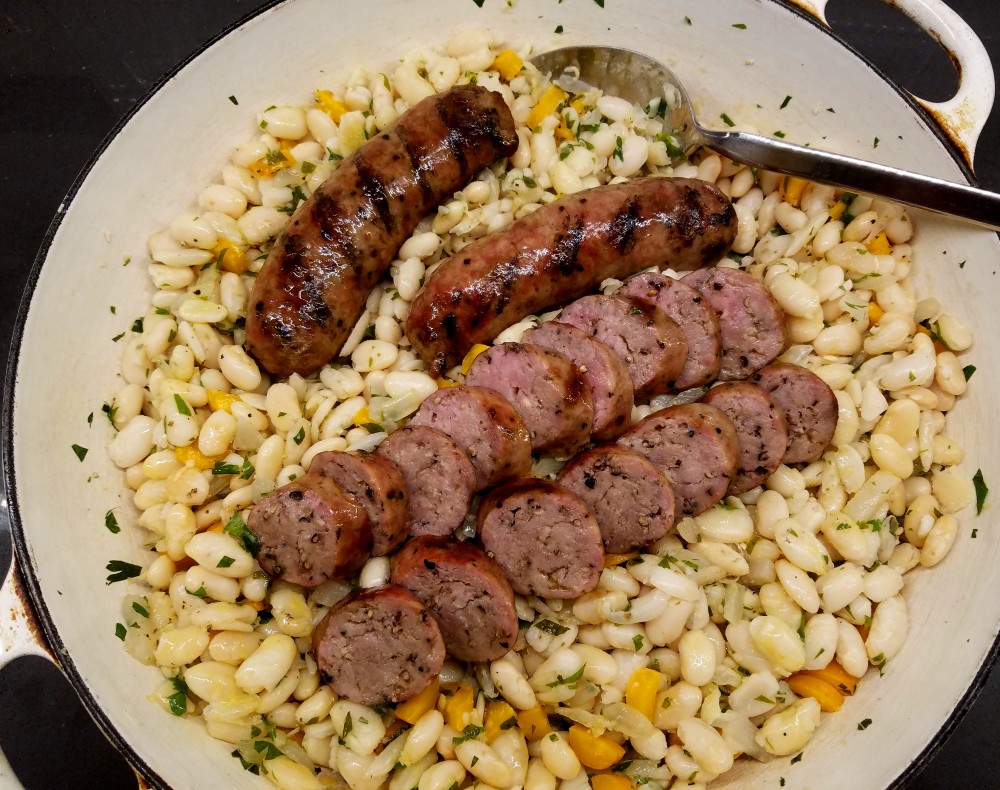 If there is one food which brings back fond memories of our honeymoon it is botifarra amb mongetes. Catalan sausage and beans. The food counters in the back of the big market, Mercat de la Boqueria, in Barcelona is where I had my first plate of this specialty and it was delicious. Looking back now with 20/20 hindsight, I could say this was the possibly moment I really started to embrace and become intrigued with the art of the sausage.

Ever since then I’ve wanted to make my own botifarra but hadn’t been able to find a good recipe. So I was very excited to see one in Charcuteria. Looking at it though I noticed it’s a very basic sausage, pretty much salt and pepper. Yes, there are variations which use some cinnamon or allspice, but for the most part it’s a simple one. Huh. How about that. Guess I could’ve even accidentally stumbled into making it somehow. In fact, I kind of did!

Is it exactly like the botifarra and beans we eat when in Barcelona? Of course not. But it’s close enough. I did amp up the beans a little to reflect the summer season. For example, our herb garden is full of fresh parsley and mint, and I’ve been pulling some carrots out the ground, so they all found their way in.

And you’ll love this next addition; a little bit of lardo. According to the book you’re supposed to fry up the beans a little, so I put some lardo in the pan to get some good fat, sautéed some onion and carrots, then added the cooked and drained beans. Didn’t quite crisp up but definitely a nice flavor. The mint I mixed in at the end is really nice.

You can serve the beans warm or cook ahead and serve as more of a cold salad with the grilled sausages. Do try to find some botifarra or a similar basic white sausage like Toulouse-style. I wouldn’t use sausages with fennel like sweet Italian but if that’s all you’ve got then that’s what you go with. It’ll be different though.

Pu the beans in a large pot, cover with water and soak overnight.

Next day, drain and in a large pot add the beans to 8 C of fresh water with the bay leaves. Bring to boil over high heat. Reduce heat to simmer and cook until tender, about 30-40 minutes. Be diligent in checking them!  I’ve found some beans cook faster than others.  Don’t stir too much, can mush the beans, but give the pot a shake every now and then.

When beans have reached desired tenderness, remove from heat and drain.

Grill your sausages. Place in a large bowl and mix in the tomatoes, onion, and parsley.  Add lemon zest, olive oil, lemon juice, and toss together.  Add salt to taste.

Heat a large pan over medium-high heat. Add some oil (or chunks of lardo) and heat. Stir in the onions and carrots and cook for 3-4 minutes. Add the beans and allow to cook until heated through. If they start to stick pour a little water in and scrape up.

When heated through, remove from heat and stir in the lemon zest, mint, and parsley. Season to taste with salt and pepper. Squeeze some lemon wedges over the beans and stir in.

Add the grilled sausages and serve.