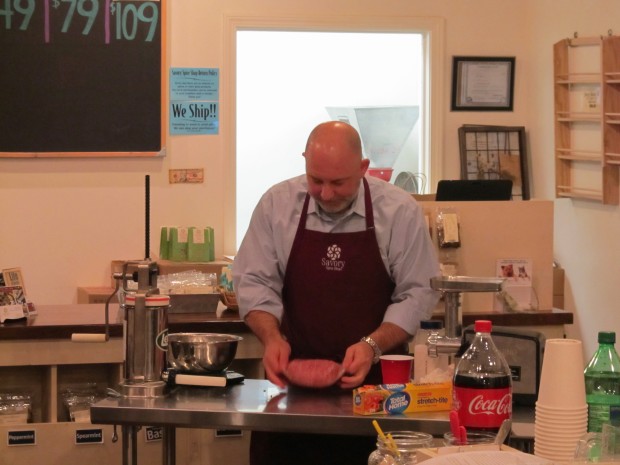 Last night I had a fantastic opportunity to take charge of a sausage making class at one of my favorite local stores, Savory Spice Shop, up in Lincoln Square. It was a really fun evening and even though I was there to give some sausage making instruction, I learned a few things myself.

First, no matter how much you prepare, you have no idea what kind of questions are coming. I didn’t know what the attendees experience level would be, and since this was the first time I’d taught a class, I prepared to talk about pretty much everything in basic terms. But I quickly figured out, from the questions being asked, most were there because they’ve made sausage or wanted to make some. I know, a real shocker. This definitely put me a little more at ease because I could delve a little deeper into the nuts and bolts of sausages, which I could talk about for hours! 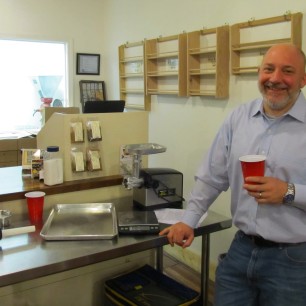 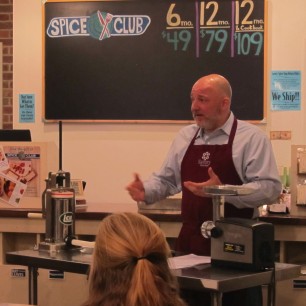 Talking with my hands. Can you tell I’ve got some Italian in me?

Also, while it’s good to cover certain things like safety and talk about how you do stuff, nothing beats actually showing how it’s done. At one point I was going over one part of the process (borrrrring) and said something like ‘you’ll see this better later when we make some’ and pretty much everyone perked up a little and had happy looks on their faces. Less talking, more doing! I probably should have realized this before since I’m one of those types of people who best learns by doing. I can read about a technique but I’d rather just learn by doing it, especially something where you use your senses. And you do use a lot of your senses in sausage making: touch, smell, sight, taste. Nothing beats experience. 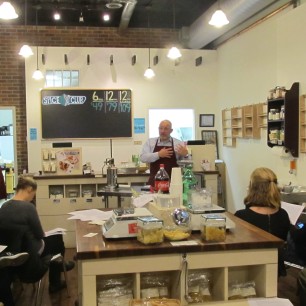 Showing how to ‘bind’ the sausage

Another thing I realized about halfway through was everyone looked to me as the expert in the room. If my friend Chef Julius were here he’d shake his head at me and say something like ‘Peter, stop it, you know what you’re doing!’ Now, in my other job as a real estate broker I get this part of being ‘the expert’ and am able speak to it on a regular basis. It’s my job. But this was totally new for me and so kind of a revelation. Cheryl mentioned afterward I had good presence and was able to answer pretty much any question thrown out with confidence. (Though there were a couple which had me stumped! You know who you are…) This made me feel pretty good because she speaks in front of people all the time so I must have done something right.

Getting ready to crank out some sausage

Last, people really really really like sausage! Which is awesome. The level of enthusiasm from everyone was fantastic. The class was scheduled for 7-8:30pm and didn’t break up until 9. Just kept rolling. I honestly didn’t think I had enough material to cover 90 minutes let alone rambling on about sausages for 2 hours. Not only that, but everyone seemed very interested in making cured sausages and meat too. I have a feeling it won’t be long before we’re scheduling a Sausage Making Level 2 class. Have to get started on replenishing some samples since they take a little longer to create! All in all a very fun evening with a new experience.