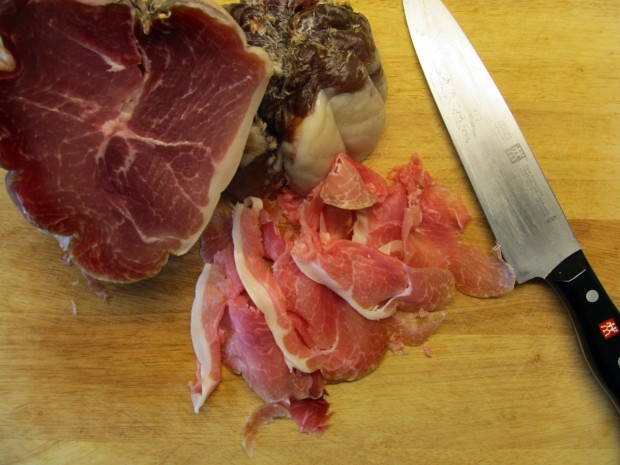 A little more than a month ago I posted about curing a butchered ham into a fiocco and culatello. At the time I was only able to show you the fiocco since being the smaller of the two it was ready in a shorter amount of time. Well, here we are 5 weeks later and the culatello is finally ready for its grand debut!

This culatello went into the curing fridge weighing about 2700 grams. This week when I checked on it I saw it had lost about 36% of the cured weight so I pulled it out. One of the differences between my much smaller fiocco and this culatello is the outer casing/bladder had really hardened and stiffened on the culatello. To soften it up for removal I soaked a towel in some white wine and wrapped the culatello inside. And by soaked I mean the towel was saturated.

I set the wrapped ham in a bowl and placed it in our back room off of the kitchen where it is cool enough to sit. After 24 hours I proceeded to cut and pull the casing away. I got a good whiff of a funky aroma, but a good funk, which excited me. Once the casing was all peeled off it was taste test time.

So good! Like the fiocco it’s ham so it has the ham taste you’d expect. At first though it seems a lot milder than the fiocco, not quite as salty as you’d expect. This could be because the ham has been kept wrapped up and hasn’t had time to breath. I’ve heard the flavor changes (for the good) after the culatello gets exposed to more air outside the casing.

Once again I am amazed that a piece of pork which cost 99¢ a pound can be transformed into such a beautiful and delicious treat by simply salting and drying it.

You can find the fiocco and culatello curing recipe and technique in the original post here.

PS – I will be leading a sausage making demo/class on Feburary 17 here in Chicago at Savory Spice Shop in Lincoln Square. Details here. It’s going to be a lot of fun!