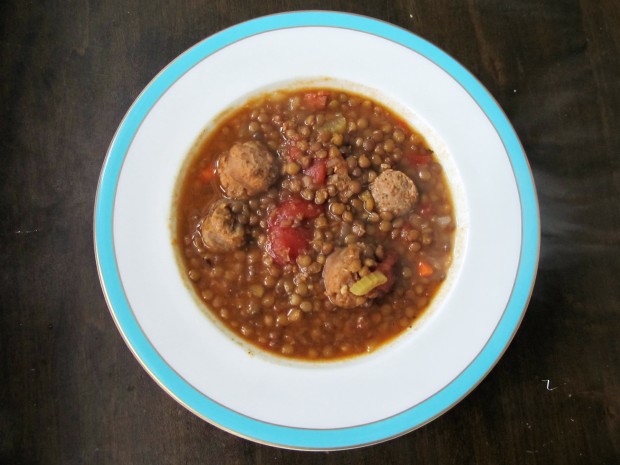 Happy New Year!  Around the world you can find people eating lots of different foods in order to bring good luck and fortune.  In Italy the good luck dish is lentils and cotechino (a sausage).  No cotechino laying around la mia casa, but I did have some lentils and some of my garlic sausage so perhaps some lentil soup with sausage will bring us a great 2014.

According to tradition, lentils look like small coins so eating them on New Year’s Day is supposed to bring prosperity in the coming year.  Pigs are considered a lucky animal in many cultures so a combination of the two makes sense if you put a lot of stock into superstitions, and I know I’m not the only one who will gladly buy into them in order to eat more sausage and bacon.  (Lucky animal?  Bah!  I say the pig is magical animal!)  And who’s really going to turning down a chance for some extra prosperity and luck in the form of a hot bowl of lentil soup with sausage?

One other factor contributing to the soup idea was the snow we’ve been getting here in Chicago.  Cold and snowy add up to great soup weather.  Also, the fact we could use some lighter fare after all of the cookies, cakes, and carbs of the past couple weeks.  My mom has a good recipe for a lentil soup with kielbasa but I substituted some of my homemade sausage in order to blend this into the whole “luck for the 2014” theme.  In her recipe she puts the kielbasa in at the beginning and leaves it there throughout the entire cooking process.  My sausages are smaller and I also slice them up into rounds so I added them when I added the vegetables since it wouldn’t take very long for them to cook.  One more note, make sure to keep an eye on the liquid, you want a soup not a stew so add an extra cup or two of water if the soup starts to get too thick.  It’s a really simple, yet very tasty, soup which will take less than an hour to make.

In a large pot combine the lentils, water, tomatoes, bay leaves, salt and pepper and bring to a boil over medium high heat.  Simmer for 15 minutes.

While the lentils are simmering, fry the bacon in a frying pan until limp (yes this is what the recipe says), set aside on paper towel, then chop into pieces.  Drain off all of the fat in the pan except for 1 Tbs.  Add the carrots, celery, and onions and sauté over medium heat for until soft, 5-10 minutes.

Add chopped bacon, sausage, and vegetables to the lentils and continue to simmer for 30 minutes.