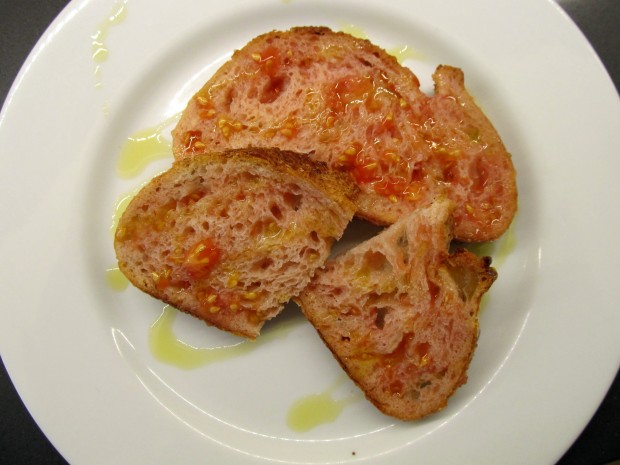 The calendar flipped to June this week and that means it’s anniversary month for Cheryl and me. The iron anniversary! My focus on Spain lately got me thinking about the tail end of our honeymoon in Barcelona, where we took a cooking class. Yes, we learned how to make pan tomate, a delicious way to turn stale bread into part of a meal. But, what I remember most is watching other people in the class make the pan tomate.

First of all, there’s not much to preparing pan tomate. Take a piece of stale or toasted bread, gently and lightly rub a clove of garlic on it, then rub a tomato half onto the slice, smushing while you go. Pretty easy, right?

Well let’s just say in our cooking class there were definitely some kitchen challenged people who signed up. In particular, a father and daughter who clearly left all the cooking to mom. They were really nice and had a great time but I don’t think they thought any ‘cooking’ would be involved.

Anyway, we were all charged with prepping/making a part of the meal. The daughter was tasked with slicing some tomatoes and somehow she managed to get through them without losing a finger. I really don’t know how. I think everyone watching was holding their breath on that one.

Meanwhile, the father was put in charge of making some pan tomate. The chef gave instructions about how to lightly rub some garlic on the bread, just a couple passes is needed, rub the tomatoes on, and you’re done. Nothing very intricate here and since he was down at the other end of a long table I wasn’t paying too much attention to what the guy was doing. Cheryl was though.

Quietly she turns to me and whispers, ‘pay attention which basket his bread goes into.’ Why? I asked. ‘Because we’ll be taking from the other basket. Watch.’ As she’s saying this I see him vigorously rubbing an entire clove of garlic into a slice of bread. We had a good chuckle and yes, definitely took ours from the other basket.

Good stuff and a great memory from our honeymoon.

Lightly rub the clove of garlic across one side of the bread. Only need to do it 2 or 3 times.

Cut one of the tomatoes in half. Rub one side of the bread with the cut part, smearing the tomato onto the hard surface. Make sure to cover all corners of the slice.

Repeat with the rest of the bread slices.

Arrange on a plate and drizzle some good olive oil on top.