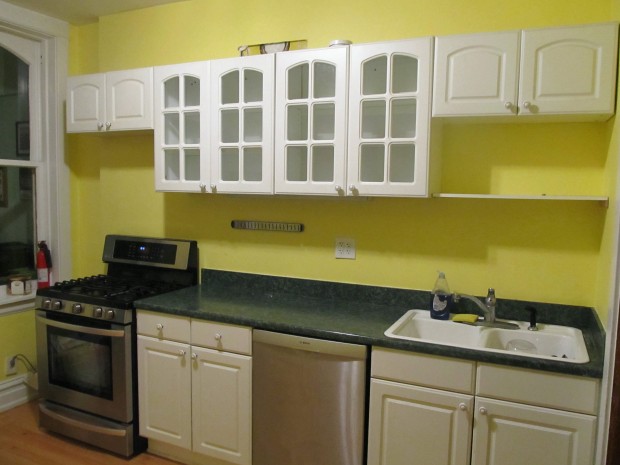 Cheryl and I have been looking at this kitchen since we bought the place back in 2012. We upgraded the appliances shortly after moving in but held off doing anything major. It wasn’t that horrible and since it’s not the kitchen that does the cooking we figured we’d overlook the decor until we couldn’t stand it any longer. We reached that point over the winter.

Originally we just wanted new cabinets and a new counter-top. Of course that’s expanded a bit to now include a range hood. And you can’t just get new cabinets and counters without doing a proper tile backsplash. Oh, and since it will be a new counter-top might as well upgrade the sink. Gonna need a faucet for that too, right? In and of itself this isn’t a huge list of items but if you’ve never done one of these before let me tell you, there’s a lot of coordinating to do. And by coordinating I mean herding cats.

Under normal circumstances I would have had all the pieces delivered ahead of time and here waiting for my contractor. However, his schedule freed up a week early so he got going before pretty much anything arrived. It’s not that bad though. Range hood was delivered yesterday, cabinets will be here tomorrow so we’re on a good schedule. However…

It’s the sink which is giving me agita.

If there is one item which is key to keeping the whole train moving it’s the frickin sink. And ours ain’t here yet. Without the sink you can’t have the counter guys come in and measure so every day there’s no sink I keep seeing an inevitable delay on the counter. If the sink were here I could have at least scheduled the counter guys for next week, knowing the sink would be installed by Tuesday. But since I have no idea where the sink is I’ve got to wait. It’s driving me crazy because even though I had anticipated not having a full kitchen for a couple of weeks I did not foresee this.

That’s the tricky little secret I’ve learned about kitchen make-overs: nothing is really in stock anywhere and everything has to be ordered and there’s much to choose. Colors, styles, finishes, knobs, pulls, etc. Everything except white subway tile, that stuff’s everywhere. So I’m not worried about that. But you can’t get to the tiling part until you have the counter installed which you can’t get measured until you have the sink!

That said, we’re going to have a much better looking kitchen. Just need to be a little patient. It is going to be very interesting cooking my leg of lamb for Easter this weekend! Maybe it’ll be nice and I can grill it.