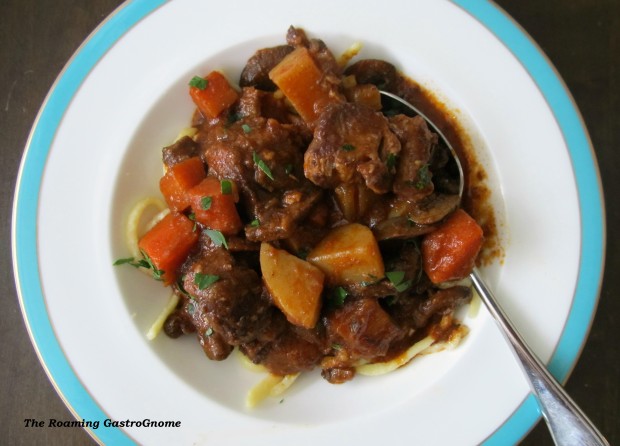 This week I fully intended on turning pork belly into bacon and thawed a 4 ½ lb slab, but we were super busy over the weekend so I never got around to it. Unlike last week’s ‘blizzard’ Tuesday was actually quite a miserable day with some rain, sleet, and snow. Good old wintry mix. Not much but just enough to make you want a nice hot dinner. So I took some of the pork belly and made a pork belly goulash.

So what’s a goulash, or gulyás? Basically a stew. According to Wikipedia gulyás means ‘herdsman’ in Hungarian, so originally it was known as a beef stew made by cattle herders. Use what you got, right? Over the years it has kept fairly true to the original version of beef, onions, and paprika. But like many old traditional recipes, goulash has many variations and arguments abound over what the ‘real’ one is. With goulash it seems one main area of contention is the use of tomatoes and/or tomato paste. It’s an argument akin to our beans or no beans in chili. Some say yes, others say absolutely not – simmer it long to thicken.

Now, you may look at this goulash and think it looks nothing like what you grew up on here in America. Correct. Here, I think we’re used to a more tomatoey, ground beef with macaroni version. I recall even my Hungarian grandmother made something like this. Perhaps because she was born here and that’s what she grew up with based on the ingredients available. Again, use what you got, and I am willing to bet during the Great Depression and WWII canned tomatoes and dried macaroni might have been what you had to work with. Just a theory, though I think if you look closely you can see this kind of recipe evolution with any immigrant class cooking when they came to America. For example, there’s much more tomato sauce used in Italian-American food, no? Yes, these are the things I think about.

Ok, back to my pork belly goulash. As I mentioned, there are many variations so I was pretty happy making one with pork wasn’t sacrilegious and I wouldn’t be making my relative spin in their graves. I think this is a pretty basic one with the pork (ok, pork belly isn’t basic), onions, garlic, some carrots and potatoes. All with a good amount of paprika, cumin, and caraway. For me it’s the seasonings which really set this apart from other stews and soups. Personally I really like the caraway taste with the rest of the ingredients. Without it, I feel it tastes more like a chili.

I went with the ‘yes tomatoes’ side and further opted for tomato paste instead of tomatoes which comes from a little experimentation. I’ve made this pork belly goulash twice before this winter, once with tomato paste and once with just tomatoes. I like it better with the paste. More of a stew and I think has better flavor. Of course if you want more of a soup (more traditional) then use tomatoes or even none at all and just reduce to develop more flavor.

Do I really have to tell you how delicious this is? Especially on a cold wintry mix evening? And the pork belly is sooooo tender. Also, despite being a pretty fatty cut the goulash is not oily at all. Serve as a stand-alone soup/stew or with some egg noodles like spaetzle, which is what we did. Very hearty dinner. And as with many soups and stews, it’s even better the next day.

Season the pork belly pieces with salt and pepper. Heat the oil on medium high heat on the stove in a large pot/Dutch oven. Brown the pork belly in batches. Remove and set aside.

Drain off most of the fat, leaving about 1 Tbs in the pot.

Add the onion, garlic, and mushrooms. Cook until the onions begin to soften, about 3 minutes.

Stir in the tomato paste, paprika, cumin, Cayenne, and caraway. Cook for a couple minutes, stirring everything together until the paste and seasonings have mixed in well with the onions, garlic, and mushrooms.

Pour in ½ C of the red wine, deglaze the pot, stir everything together, and then cook down the liquid until almost dry.

Add the remaining wine and water/stock. Bring to a boil.

Add the pork belly pieces back into the pot with any juices.

Bring to a boil then cover and reduce to simmer. Simmer on the stove-top for 60 minutes.

After simmering for 60 minutes, add the carrots and potatoes.

Continue simmering for another 30 minutes or until the carrots and potatoes are cooked.

Serve as stew or over spaetzle/egg noodles.