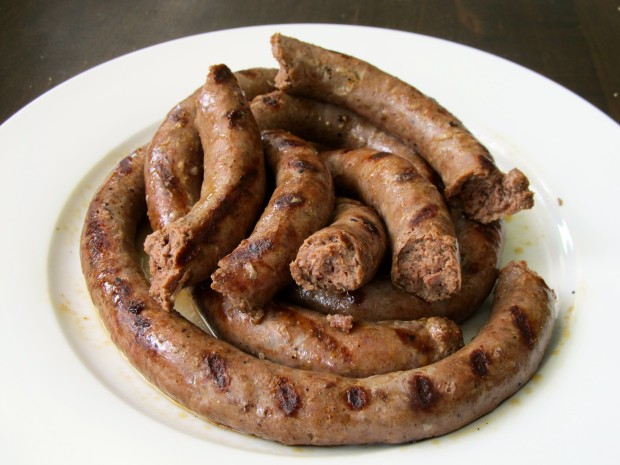 Ok I’ll admit, I’m on a bit of a sausage making kick lately. One reason is because Cheryl and I have been pretty busy with work and so I haven’t had much time to do some good experimenting with our CSA boxes. Another is sausages are pretty easy to make and are delicious. I’ve long wanted to make a merguez and after sampling one at Marche Jean Talon on our Montreal trip I decided now was a good time.

So, what’s a merguez? Merguez is a sausage of North African origin usually made with lamb or beef. Upon researching recipes I quickly figured out merguez is one of those sausages which has many variations. Some use all lamb, some all beef. Some merguez contain a lot of garlic, some heavy on hot spices, but pretty much all used some form of a harissa spice blend (or even the paste), made primarily of ground chiles and cumin. While it seems you could use regular hog casings, merguez is traditionally made with sheep casings which are smaller in diameter. The sausage is long and thin like breakfast links.

For my merguez I decided to use a mix of lamb and beef instead of going with all lamb. Lamb’s not inexpensive and since it usually pretty fatty I figured adding some beef would even help balance out the fat content. It did but maybe a little too much, I think next time I’ll use a 4:1 ratio of lamb to beef instead of the 3:2 I used here. Also I might make a paste out the harissa powder and then fold into sausage in order to get a redder color. The sausage turned out great in taste, has a good heat to it but not too much, and even though the dried lemon peel I added seemed to get overpowered or folded into the sumac berries it has a really nice tanginess!

[Side Roam: One ingredient I saw in the recipes which intrigued me was sumac. I’d never used it before but discovered my local spice shop, Savory Spice, has crushed sumac berries in stock. It has a very tangy almost lemon-like taste, more sour than bitter, and apparently was used in Roman cooking before they figured out lemons do the same. If you can find some try it!]

A quick note on sheep casings, I did have to get a smaller tube for my stuffer to accommodate the smaller size. They won’t fit on the regular pork one. It was worth the investment though as I didn’t have any problem loading the casings onto the tube. Very convenient. Also, when figuring out how much sheep casings you need go with twice the length for the same amount of pounds of pork sausage in hog casings.

Combine and mix the diced lamb, beef, and spices. Chill until ready to grind or set in refrigerator and chill overnight.

Run water through the casings and let soak in a small bowl of water for 30 minutes or until you’re ready to stuff them.

Using the medium holed grind plate, grind the seasoned lamb and beef mixture into a mixing bowl set in ice.

When done grinding all of the meat, add the water and mix until it is absorbed and the sausage gets “sticky.” If using a stand mixer it will take about 1 minute with the paddle attachment.

Make a small patty and cook to check the seasonings.

Stretch and push the sheep casing onto the stuffer tube attachment, leaving an inch or two hanging off the end of the tube.

Stuff the sausage keeping one hand on the end of the tube where the casing is getting stuffed and help it along if it gets stuck.

Twist into links or cut into 1 lb coils.