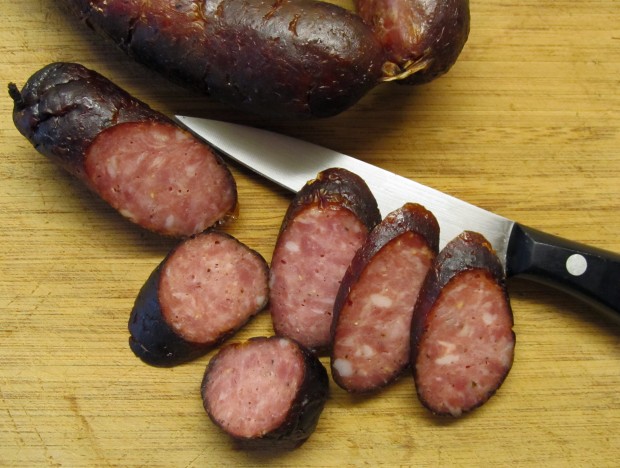 Jagerwurst (hunter sausage) is, as you may have guessed, a German sausage. If you have German butcher shops in your area like we do here in Chicago the sausage will not be unfamiliar to you. It’s a 5-6 inch pork sausage, mildly seasoned and smoked. Jagerwurst is much more filling than a snack stick (like the pork and beef smoked and dried Landjager) so you can see why a hunter might stow a couple of links in his pack for a day out in the woods. One of these with a little wedge of cheese and bread will be plenty to sustain you. We’ll put that to the test when we take some with us hiking this weekend!

To get a better idea as to how it was supposed to taste I picked up a couple links of Jagerwurst from one of our local German butchers over the weekend. Mmm, research! Theirs was smoky, salty, everything you’d expect, but that was about it. For the life of me I couldn’t pick out any particular spices. Looking at a Jagerwurst recipe in Ruhlman’s Charcuterie I could see why that might be the case. Though he describes Jagerwurst as aggressively seasoned, the measurements he gave were in teaspoons. For 5 lbs of pork. Aggressively seasoned? I think not.

However, while I did increase the seasoning amounts, I didn’t go all-in because I didn’t want my first smoked sausage trial to be overly nutmeg-y or ginger-y. Unsurprisingly, my Jagerwurst tasted very similar to the control sausages. But the one seasoning I did push the envelope on, garlic, definitely comes through the smoke. Lesson: I need to trust myself a little more and up the rest of the spices next time.

As far as sausage making goes, Jagerwurst was a little different to make than my regular ones, but just as easy. In order to get the rough texture inside you need to grind the meat through the large holed plate of the meat grinder then re-grind half of it through the smallest one. Smushing the already ground pork back through the grind tube was a little bit of a struggle but worth it. You can see the texture in the photo, looks pretty much like one from the butcher shop, no?

Two other interesting differences of this sausage are it has no added fat-back and uses powdered milk as a binder. I’m not sure of the science behind it but I’ve noticed a lot of smoked sausage recipes have powdered milk as an ingredient. I think maybe it helps retain moisture when smoking. When mixing it in with the pork chunks everything became very sticky and glumpy. Of course it would, it’s powdered milk, so any moisture added would start the reconstitution process, making more of a paste if not enough water is added. Quite the binder indeed!

All in all the Jagerwurst turned out great, and I’m very very happy with it (so is Cheryl). Honestly, other than low-balling the seasonings, I felt the sausage was pretty damned near perfect. It’s a really tasty and fairly easy smoked sausage to make. Excellent texture from the large and small grind, wonderful smokiness, and good garlic flavor which I like. Just slice (or not), add cheese, pour a beer, and enjoy! Preferably while taking a break from some sort of outdoor activity.

Cut the pork into chunks and add all of the salt and seasonings, except milk powder. Mix well and place in the fridge overnight.

Place your grind plates and grinder parts in the freezer and chill for at least a half hour.

Run water through the casings and let soak in a small bowl of water for 30 minutes or until you’re ready to stuff them.

Take the seasoned pork out of the fridge and mix in the milk powder.

Replace the large hole grind plate with the small one.

Take half of the ground pork and run it back through the grinder.

Mix the two grinds together and combine well. If using a stand mixer it will take about 2 minutes with the paddle attachment.

Stretch and push the hog casing onto the stuffer tube attachment, leaving an inch or two hanging off the end of the tube.

Stuff the sausage keeping one hand on the end of the tube where the casing is getting stuffed and help it along if it gets stuck.

Twist the sausage into 5-6 inch links.

Hang the sausage or place on a drying racks on your kitchen counter for a couple of hours in order to develop a stickiness (pellicle) on the casing which will ‘catch’ the smoke.

Hang on smoke sticks and smoke in you smoker at 180-200°F until the sausages reach an internal temperature of 150°F.

Side Roam: I ended up smoking these for a little more than 2 hours, temps were right around 190-200°F. They’re small so they don’t take as long as a big 5 lb chunk of meat. Ruhlman says to hot smoke at 180°F but I don’t think my higher temperature damaged the sausage. Taste just fine.

When the sausages hit 150°F-160°F internal temp pull them out of the smoker and immediately chill in an ice bath (another difference). I am certain there is more science behind this, like cooling it quickly solidifies chunks of fat and suspends them in the pork making a distinct texture. Then again, maybe someone just wanted to cool them quickly in order to eat faster.

When cooled dry off, and set on drying racks or hang on some hooks to dry off for day, then refrigerate.