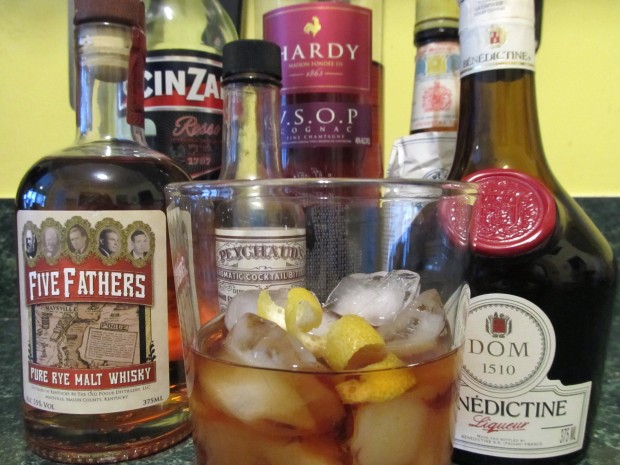 What is it about New Orleans cocktails that they are all so inherently potent? Of the three you’d normally associate with the city, Sazerac, Vieux Carré, and Hurricane, only the Hurricane gets ‘watered down’ with any fruit juice. The other two are just straight up combinations of booze. This week I’m skipping over Valentine’s Day and getting ready for Mardi Gras with the Vieux Carré cocktail. Laissez le bon temps rouler!

Invented at the Hotel Monteleone and named after the old French Quarter, it’s not surprising the Vieux Carré’s ingredients of Cognac and Benedictine give a bit of a nod to the city’s French influence. It’s an old school cocktail, but doesn’t seem to have enjoyed the rebirth of some others like the Old Fashioned and Manhattan. Perhaps because there isn’t much whiskey in it.

I realize the main ingredient of Cognac isn’t a very common home-bar spirit so I threw myself into experimentation mode this week and made more than a few Vieux Carré with similar ingredients to see if there were possible substitutes. The things I do in the name of blogging for my readers. Work, work, work!

Cognac is of course a brandy (but not all brandies are Cognac!) so I first tried making a Vieux Carré with plain brandy. Then I swapped out the rye for bourbon…cognac and bourbon…brandy and bourbon…brandy and rye…and after all of that I came to the conclusion that the original really is the best. The cocktail gets a little too sweet and Manhattan-like with the bourbon and Benedictine, but with rye the Vieux Carré is a little more balanced since rye can be a little ‘hotter’ and dryer than bourbon whiskey. I was using a decent Cognac as well which I think also helped make it a smoother drink than with the brandy.

That said, if you’re in a pinch brandy and bourbon are good substitutions. However, I have no idea what to do if you don’t have any Benedictine. I read Drambuie is kind of similar but if you don’t have Benedictine I doubt there’s any Drambuie in your bar, so just go out and purchase a small bottle, you can always use it up in a B&B (Benedictine and Brandy).

Combine all ingredients in an ice-filled rocks glass/tumbler, mix, garnish with a twist of lemon. Laissez les bon temps rouler!