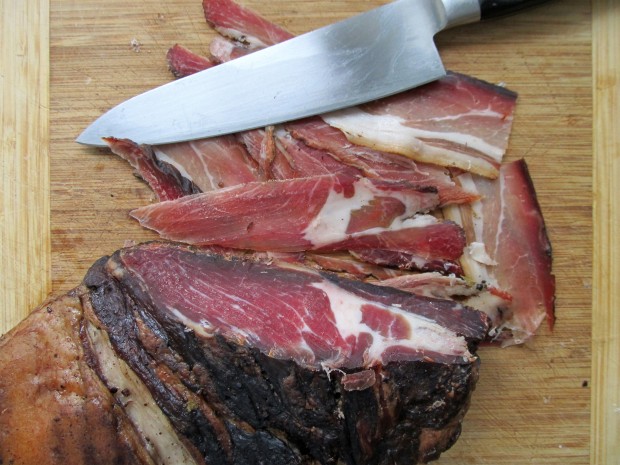 Just before Thanksgiving I cured and cold smoked a boneless pork shoulder and a picnic ham then hung them in my curing fridge in the basement. This past weekend the speck cured shoulder was ready. I was pretty excited to see how it turned out.

The outside of the ‘speck’ had hardened a bit more than I like so it took a little extra effort on the slicing. This is one of those times I wish I had one of those deli slicers.  For some reason I was having trouble keeping humidity up in the fridge which definitely contributed to this. Not too much of problem though as the inside cured and dried very nicely. It’s not spongy like cooked ham and it’s not velvety like prosciutto, but it has a good dryness to it but not dried out like jerky. Color looked good throughout.

How’s it taste? Pretty damn good. As you can imagine there’s a strong smokiness to it and in the background you can taste the juniper berries and bay leaf from the cure. Basically, tastes like dried smoked ham. Cheryl and I ate A LOT of this the day I brought it upstairs. Just couldn’t pull ourselves away! All in all it turned out well except for the slightly over-dried outer layer. That’s easily solved with some minor adjustments to the fridge.

Even with the one issue this was a pretty successful move up the curing ladder, adding cold smoking to the repertoire and aging a much larger piece of pork. I really think I’m getting to the point where whole muscle cuts, like this shoulder, are becoming easier to do as I cure more of them. I’m very interested to see how the blackstrap molasses picnic ham turns out. If that one turns out well I may just have to move to the rear of the pig and hang proper ham in the fridge!