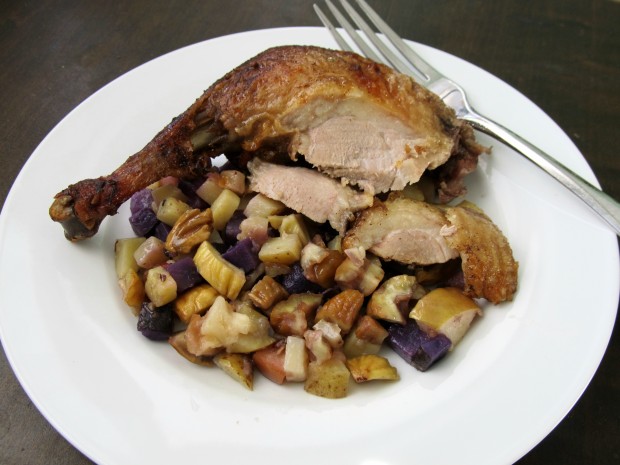 A few weeks ago I decided to roast a duck for our weekly Wednesday date night. Looking at The Flavor Bible, duck has a pretty wide and interesting mix of flavor ingredients and most are very seasonal for fall and winter; like apples, potatoes, ginger, allspice, chestnuts, cinnamon, and more. There were many ingredients on the list I liked and wanted use but bringing them all together for one dish seemed way over the top, so I decided to pick and choose a few favorites and add them to separate parts which when later combined would complement each other. Thus the idea of making a sort of hash seasoned to pair with a glazed roast duck.

This was a really delicious combination as I had guessed it would be. The duck could probably stand up on its own, it is duck, but the hash most definitely benefits from the duck. While it turned out the way I intended I think I can make it even better. This one of those times where things pop in my head after cooking and I say ‘oh yeah that would have been the thing to do.’ For example, instead of dicing the potatoes I think shredding and making a crispy rosti-style potato cake might be a better texture contrast. The hash could also benefit from some added color like carrots or Brussels sprouts but again these are minor quibbles on my part. I wouldn’t change anything with the duck (again, it’s duck!) because the allspice and the apple-honey glaze taste great together. I guess sometimes if it’s good, it’s good, and I should just accept it!

Not only is this a good dinner for date night but I think it’d make a great holiday dinner. It’s no Christmas goose but duck is easier to get your hands on and it’s really not that difficult to make. Once you cook your first duck you realize they’re really not much different from other birds. Just more delicious and coated with a tasty layer of fat!

Roast Duck with Apple-Chestnut Hash (serves 2 perfectly, but could serve 4 depending on size of duck)

Pre-heat the oven to 250°F. Season the duck with salt and pepper and rub allspice powder all over the outside of the duck. Truss the duck with some kitchen string. Place the duck on a roasting pan and roast for 25 minutes.

Remove and allow to cool. In a small saucepan combine the cider cider-vinegar, and honey. Simmer over low heat and reduce to a glaze.

Increase oven temperature to 350°F and cook duck for 1 hour 15 minutes, basting every 20 minutes or so, until the skin is crispy and brown. It could take a little longer. Just keep going until the skin gets brown.

When prepping the duck trim off some good sections of skin, like from the neck area which always has a really big flap and around the cavity.

Slice up the duck skin, put in a pan over med-high heat, and add a ¼ C of water. As the fat renders from the skin the water evaporates and the skin crisps up in its own fat. Remove from the pan when brown and crispy, set on paper towels to drain. Reserve the duck fat in the pan for the hash.

Over medium high heat in a sauté pan add the duck fat until hot.

Add the diced potatoes and cook until they begin to brown. Add the diced apple and stir in. When the potatoes are cooked and the apple softened add the diced chestnuts. Season with salt and pepper, add the duck crackling and serve with slices of roast duck.