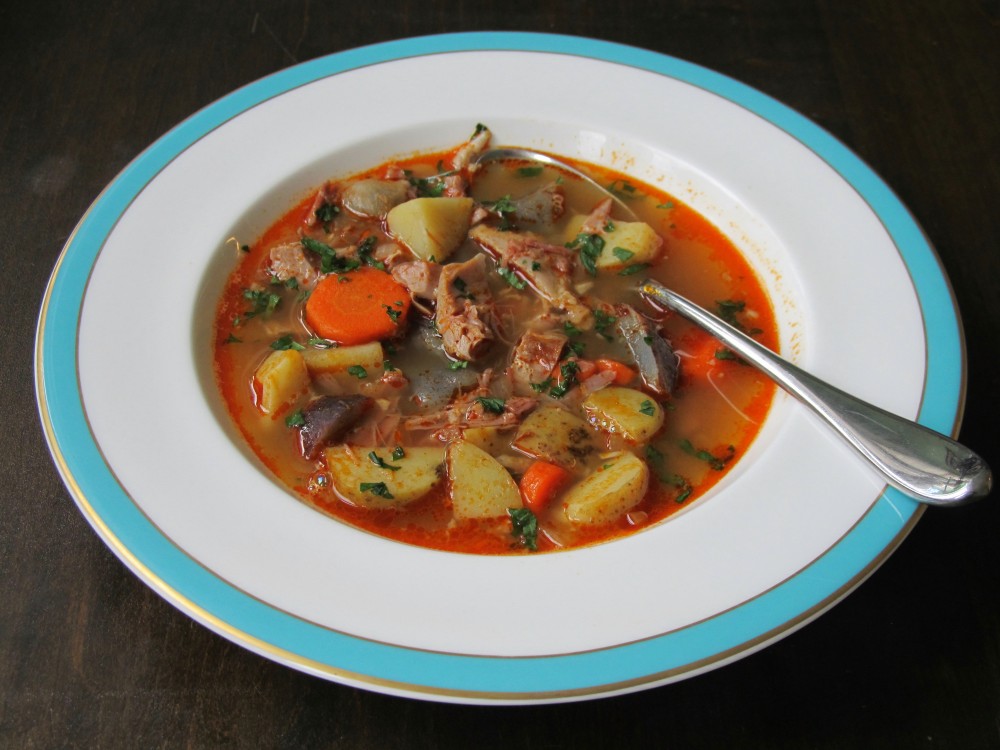 In a recent Saturday edition of the Wall Street Journal there was a recipe for German goulash soup which looked pretty good but I didn’t have much of an urge to try it and promptly forgot about it. However, this changed when Cheryl and I were shopping at a nearby German butcher/grocery, Gene’s Sausage Shop, where I saw something at the meat counter which reminded me of that soup recipe: Hungarian Style pork shanks. They were just begging me to take them home and turn them into a soup! I quickly took a number and waited my turn.

Since I’d never seen these at Gene’s before, I inquired about them and was told they are seasoned with paprika, lightly smoked, and much meatier and juicier than smoked hocks. He wasn’t lying. Because they’re shanks they only have one bone in them and aren’t too fatty, unlike pork hocks. Don’t get me wrong, I like using smoked pork hocks in soups and stews as they add a nice smoky flavor, but there’s a lot of picking to them and not much meat. With a goulash soup though, you’re going to be getting that smokiness and spice from the paprika so meatier shanks work much better.

With the recipe in mind I went back and looked it up to see how it was made and what other ingredients I might need. It was enlightening because my idea of what would go in this soup was not really close to the Wall Street Journal recipe. They used beef and caraway seeds, I had pork and cumin. So I did some further research to see if these were acceptable substitutes. It seems they are somewhat, but using pork changes the name of the soup/stew. I also discovered Hungarian goulash is considered neither a soup nor a stew but something in-between. Whatever. Since I had pork and no beef I decided I’d just forge ahead and make my own which isn’t difficult if you know how to make soup from scratch.

The shanks tenderized a lot faster than hocks do when simmering for soup stock. After about an hour I checked on them and they were practically falling apart. The shanks basically crumpled when I used the tongs to take them out of the pot which made the job of shredding and chopping the pork very easy. Definitely going to use these pork shanks again.

This is a very flavorful soup. It’s got pork, a good cumin flavor, carrots, potatoes, and just enough heat and smokiness from the paprika. Since I was doing my own thing I used Spanish pimenton instead of Hungarian paprika so in the end I guess this became a Spanish spiced soup based on a German recipe based on a Hungarian semi-soup/stew. Creative cooking at its best!

In a large pot, cover the pork shanks with water. Bring to a boil on the stove. Reduce heat to simmer and cook for 60-90 minutes until shanks are fork tender. Remove shanks from pot, reserve the liquid. Allow shanks to cool, then shred the meat off of the bones and chop up.

You should have at least 4 C of pork shank simmering liquid remaining in the pot. Skim off as much fat as you can. Easy way to do this is to let the stock cool, as it cools the fat will cool and eventually solidify making it easier. Unless you have one of these wonderful fat separators (like me), then by all means use it instead. Reserve the pork shank stock in a bowl.

Melt the butter over medium heat in a soup pot. Add the carrots, onions and garlic, sauté for 3 minutes.

Stir the cumin, paprika, and tomato paste into the vegetables. Cook for a minute.

Pour the shank stock and 2 more C of water into the pot. Add the pork shank chunks and bay leaf. Bring to a boil over medium high heat.

Reduce to simmer and simmer for 10 minutes. Add the potato pieces. Continue to cook until potatoes are tender, about 10 more minutes. Season to taste.

Serve with some crusty bread.