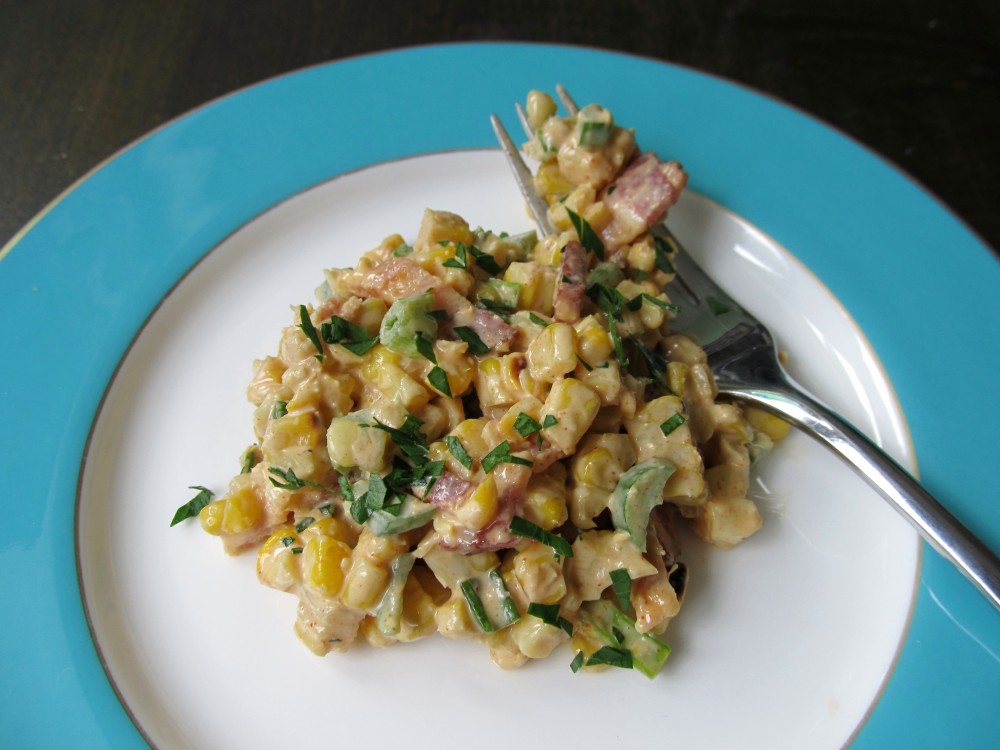 For me, August means sweet corn. Back home where I grew up, in the Mid-Hudson Valley of New York, this is the part of summer when sweet corn is coming into peak harvest and ‘fresh corn’ stands sprout up on rural roads like…well…corn stalks. I love to eat corn on the cob but variety is the spice of life so this week I’m taking elote, the grilled Mexican corn treat, and turning it into an even more savory summer corn salad.

What’s an elote? Elote is often described as Mexican ‘street food’, grilled corn on the cob covered with some sort of mayo-cheese-spice mixture. While it’s normally eaten by peeling back the leaves to form a handle, elote can also be served in a cup or bowl like our local pub Black Rock does. They have a really tangy cheesy version and it’s where I got the inspiration to make an elevated elote salad once fresh corn season hit.

Of course, there are many different variations of the dish and like last week’s Caponatina, an internet search does not give one definitive way to make elote. No problem, just makes it easier to take the mayonnaise base and mix in my own finishing touches. To start I decided to take out some of the mayo and add in some homemade aioli to give it some garlicky olive oil flavor. I also added some vegetables which are also in season like green bell pepper and some scallions from our garden, as well as some savory bacon I just made the other day. You won’t be all that surprised to find out these ingredients also come highly recommended by The Flavor Bible.

Instead of grilling the corn I boiled them first and then finished the ears on the grill to get a little char flavor on them. In hindsight I think grilling the ears from the start would probably be best as you’ll get more toasted corn flavor from the husks, but boiling the corn works just fine and is a little quicker since you don’t have to soak the corn in water for an hour. This is also a really good make-ahead recipe because if you let the salad sit in the fridge overnight the flavors really meld together and intensify. There’s a lot more zip from the pimenton the day after!

If grilling the corn, soak corn in husks in water for an hour. Cook on medium heat grill over indirect heat (if you have two burners leave one on and place corn over the one which is off) and turn over with tongs when the husks brown. When the husks are completely browned remove and allow to cool. Remove corn from husks and cook on grill to the desired level of char you like. No need to burn them!

If boiling, bring a large pot filled with enough water to hold all the corn to a boil.  Add corn. When it boils again the corn is done. Remove and allow to cool enough to handle.

While cooking the corn combine all of the other ingredients in a bowl.

Slice the corn off of each cob with a knife, holding it at the top end and placing the other end on your cutting board, slice down the cob away from you towards the cutting board. Try to get as much of the kernels and not the cob. Repeat with the other three ears of corn.

Add the loose corn to the bowl and mix well. Taste and season. Chill for at least an hour, preferably overnight.