From my last post you may have guessed correctly we’re on vacation.  Right now we’re relaxing on the Costa Brava in Begur, Spain but before coming here we journeyed up into the Pyrenees for the main reason of the trip, seeing a mountain stage of the 100th Tour de France (maybe that should be raison d’etre then).  The stage we saw? Stage 8 from Castres to Ax 3 Domaines, about 200 km.  The first mountain stage of the Tour and a mountaintop finish at a ski resort.

Cheryl did a lot of research for this trip and picked Puigcerda, a town on the Spanish side of the Pyrenees, as our base for seeing this stage.  By coming into Ax les Thermes (where the ski resort of Ax 3 Domaines is) from the south we’d avoid the road closures into and out of the mountain village before and after the stage.  Ax les Thermes was about an hour’s drive from Puigcreda, and it was a really picturesque drive into the Pyrenees.  The Pyrenees are breathtakingly beautiful and look exactly how they do on TV, except bigger.

Anyway, we arrived in Ax les Thermes around 11:30am and were able to drive almost all the way into town.  We parked along the road and walked for about 25 minutes into the main square of town.  Since we had about 4-5 hours before any riders actually showed up we took in the local atmosphere and a few beers before heading up the mountain to claim a spot on the road.

After a couple of beers we headed up.  We decided on a spot about 5k from the finish in a place between the two main sets of switchbacks.  We figured this may be the spot where there’d be an attack by riders and it also had a view of the switchback below so we could see what was coming and be ready.

Now, there is a lot of waiting around on the mountain so the Tour de France entertains everyone with a caravan of sorts of all the Tour sponsors.  (Minor rant here.  After witnessing this I cannot ever see the Tour really trying to rid itself of the doping and drugs.  There’s way too much money involved in the advertising and sponsorships, as you’ll see…)  The beginning of the caravan precedes the riders by about two hours and the entire train of floats, cars, etc. lasts about an hour, so you have approximately 60 minutes or so of waiting once the caravan ends until the real show arrives.

People go nuts over the caravan and the free stuff they give away.  If you’ve watched the Tour on TV you always see a lot of people in those red polka dot jerseys signifying the “King of the Mountains” jersey.  It’s similar to the Maillot Jaune (Yellow Jersey) the overall leader gets to wear but it’s just for the rider who has been the best climber in the mountains (points are awarded for order of riders going over the summit).  Anyway, the fans haven’t bought these special jerseys in town on race day, the jerseys are thrown out the windows of one of the sponsor cars (Carrefour in this case).  These are, of course, highly coveted and there is diving along the road for them.  We didn’t get any.  We did get some polka dot cycling caps.  Not the same though.

Once the caravan passes, a calm returned to the mountain as everyone kind of watched across the valley to see the first riders descending from the previous climb into Ax les Thermes.  I’ve had worse views to wait with.

After about an hour the mountain was again buzzing as the first riders were seen.  You knew they were really getting close when the TV helicopters arrived.  Eventually you could hear the crowds below and knew the riders had arrived.  We’d heard there was a breakaway rider so it was going to be an interesting finish to see if he could hold off the rest of the chase, which we knew had to include Team Sky as their man Chris Froome was a top climber and favorite to win the Tour.  He’s a climber so we expected him to be fighting hard.

I really was amazed at how fast these first riders made it up the mountain.  Amazing.  They were by me in a heartbeat.  Then came the rest of the riders. 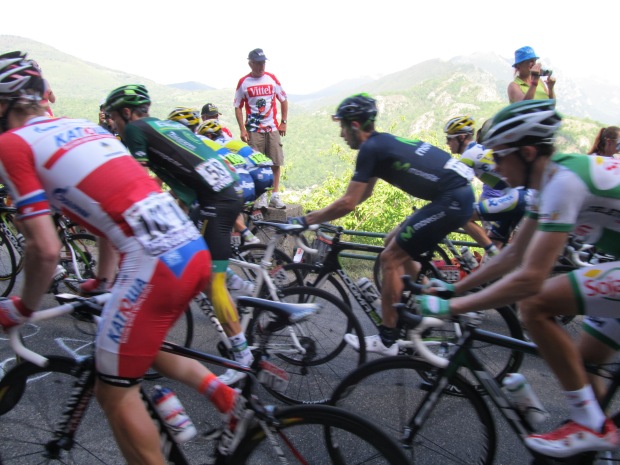 Had to wait a while for the Tour leader to appear in the Yellow Jersey.  Since all the previous stages were flat, it was worn by a sprinter.  Sprinters don’t do well in the mountains.

The crowd was awesome.  They really cheered hard for the first rider and the chase group but they really let it all out for the man in the Yellow Jersey, as everyone knew (including the rider) he wouldn’t be in it at the end of the day. 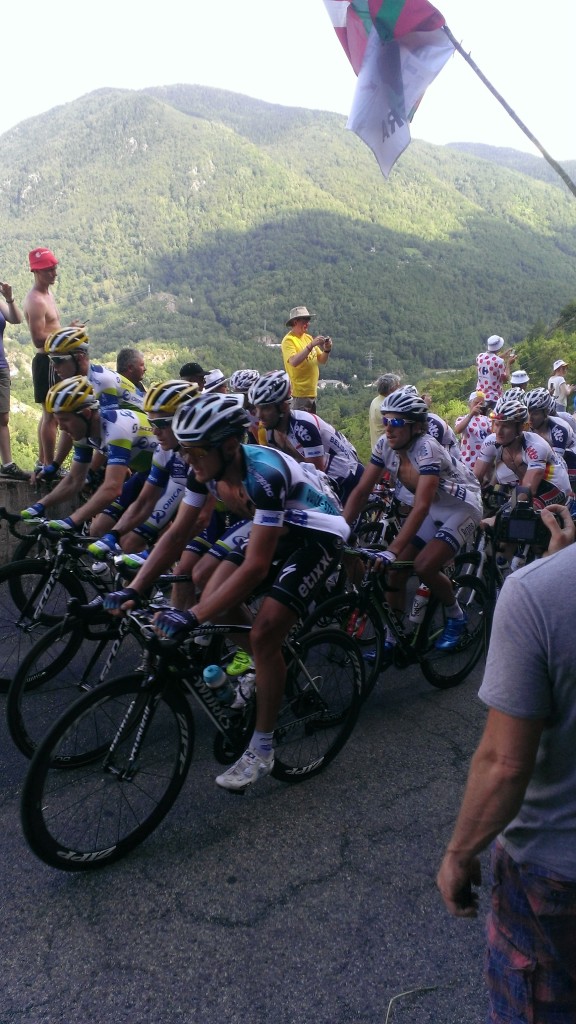 After the last rider went up and the Broom Wagon went by (a van which collects riders who quit or abandon the race) we started back down the mountain to our car.  This is where a really cool thing happened.  Since the finish was at the top of a mountain at a ski resort everything which went up had to come back down.  A lot of the riders just rode back down to their team buses, so all of a sudden you’d have the racers whizzing by.  First one I saw zoom by was Alberto Contador.  It was like being in the tunnel to the locker room.  The kids walking down really loved it and kept right on cheering the riders.

Since we had parked on the road going away from Ax les Thermes towards Spain and not the next Stage starting point we were able to get out as soon as we got back to the car.  On the walk to the car we even saw some more riders going up our road on a cool down ride.

As far as sporting events go, this was pretty damn awesome.  You have to get there of course, but it’s probably the only major sporting event you can walk up to and get this close to the athletes without having to buy a ticket or pay a fee.

So, things we learned and tips for seeing the Tour de France are: