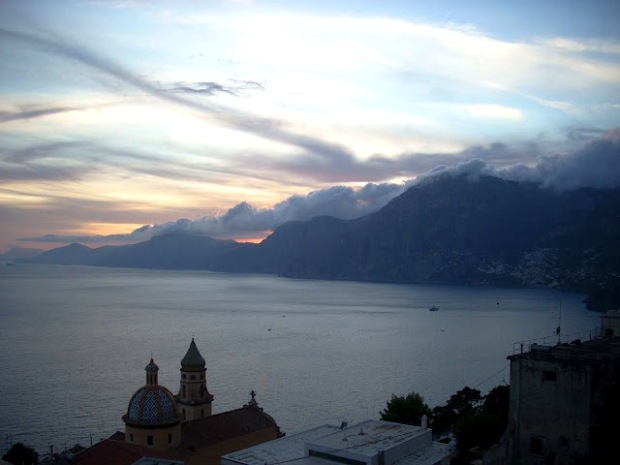 Since I started this blog, I’ve not had the chance to put too much up regarding our foreign travels.  Zurich was the first time Cheryl and I had been abroad since last September when we met her sister and sister’s boyfriend (now fiancée) in Italy for a week on the Amalfi coast.  Shelly and Ross live in Edinburgh (Cheryl also spent a semester there back in her undergrad days) and we love visiting them, Edinburgh’s an awesome city, but they’d never been to Italy so we came up with the idea of meeting there for some relaxing time in the sun.  They were quite agreeable to this idea.

Side Roam: It does not take much to get me to go to Italy.  Probably my favorite place to travel to and I’ve pretty much converted Cheryl into an Italian holiday fan.  Our first Euro vacation together was in Italy.  She was taking a barge trip down the Loire with her parents and aunt and I suggested meeting up in Italy so she could have some relaxing time before going off to business school.  She agreed.  I met her in Milan and took her up to Como.  Great trip.  I knew she liked Italy almost immediately when she commented the waiters in Italy were much friendlier than in France.  Since then we’ve been to Rome, Florence, Naples, and spent part of our honeymoon on a beach in Sardinia.  Anyway, she’s now an avowed fan of touring the boot.  And the friendly waiters.

Back to the Amalfi Coast.  We booked a villa through Summer in Italy for a week (they were great btw, very nice service and a good experience) in the small village of Praiano, located to the east of Positano.  The good part about not being in Positano was we had views of Positano and Capri from our villa (opening photo).  We also didn’t have to deal with the higher prices and crowds.  Praiano is much quieter but has good restaurants and shops to buy all you the things you need for a self-catering vacation.  The villa was also located at the beginning of a trail which led up to the “Sentiero degli Dei” or Path of the Gods.  There are lots of trails for hiking around the Sorrentine Peninsula, however as we knew from our hikes in Como and Sardinia they are difficult to find.  If you’ve traveled in Italy you are no doubt familiar with the street signage rule of thumb where every street is marked except of course the one you’re looking for.  Hiking trails are the same way.  So, armed with a Sunflower Guide (put out by the English of course who love their walks) we were able to find the path from Praiano to Positano.

Absolutely beautiful hike.  We started out fairly early in the morning, packed a lunch, and set off.  It was a trek up to San Domenico monastery where we’d link up with Sentiero degli Dei.  Up, up, up we climbed…

The Stations of the Cross were placed at intervals along the path up to San Domenico.  I thought that was very interesting and I imagine it helped the monks pass the time on the steep climb.  I reached back into my Catholic school memories to see if I could remember them all.  I didn’t (sorry Sister Hubertine) but I did remember there were 14 of them so with every one I passed I knew we were closer to the top.  Well at least the top of stage 1!

Once we passed the monastery it was pretty much downhill from there.  No seriously, once we joined Sentiero degli Dei it was a pretty level path across and down to Nocelle, then straight down to Positano.  Couldn’t imagine walking the reverse from Positano.  The climb up to here was the most strenuous part of the hike so we could now casually cruise along and enjoy the views.

The stairs down were rough.  We were all pretty tired and my knees were aching.  We couldn’t get to the bottom fast enough. 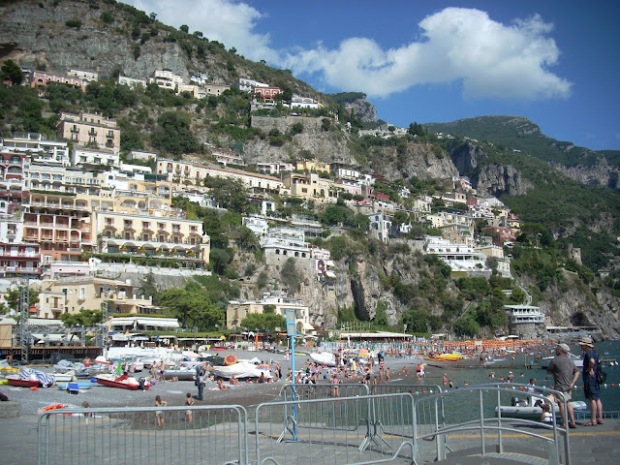 We eventually went all the way down to the beach in Positano.  I took off my shoes and shirt and went in the water.  Never felt so refreshed in my life!